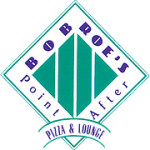 The Point After was founded in 1982 by Bob and Karin Roe. In 1977 they founded Westside Pizza which is now currently owned and operated by their daughter, Terri Rexius. They worked many years side by side and now Bob is actively operating the Point After.

The unique thing about the Point After is that people of all ages are customers. On many nights there are three or four generations of family members there. It is truly gratifying to see customers who started coming to the restaurant as teenagers bring back their children and grandchildren.

It is truly the place “Where Good Times Gather”. It is a very relaxed environment with something to do for everyone. The Point After also delivers and can accommodate most groups. Reservations are not required but for a group reservations can be made at 276-3689.

Since opening June 28th 1991 at our present location the Point After has been the talk of Siouxland. You never know who will be sitting by you. Here are a few people who have stopped by; President Barrack Obama, Chip Lohmiller, George Allen, Ernie Els, Jim McGovern, Jeff Meggont, Jeff Woodland, Bob Feller and of course all of our local sports figures. Our personal collection of sports memorabilia is one of the finest around and can be seen throughout the restaurant and bar for your enjoyment. Our satellite dishes bring you games from wherever the action is. During the NFL season we show all the NFL games at once on our 31 TV sets. Feel free to roam around and enjoy your visit.

To say Bob Roe is involved in the community would be an understatement. Nearest and dearest to his heart is the Boy’s Club. He has hosted a Boy’s Club Auction at the Point After for 20 years and this years will be December 4th. In 2006 he was awarded a “Friend of Boys” award. He also has contributed to about every sports team in Sioux City. He was elected to the Greater Siouxland Athletic Association’s Hall of Fame as an athletic supporter.

Bob has spent his entire life in Sioux City. He is not only a great host but a great amateur historian. Stop in and meet him at Bob Roe’s Point After. 2320 Transit Avenue. At the Point After, you are always our MVP (Most Valuable Patron).

There are no reviews yet.

Some of our favorite listings